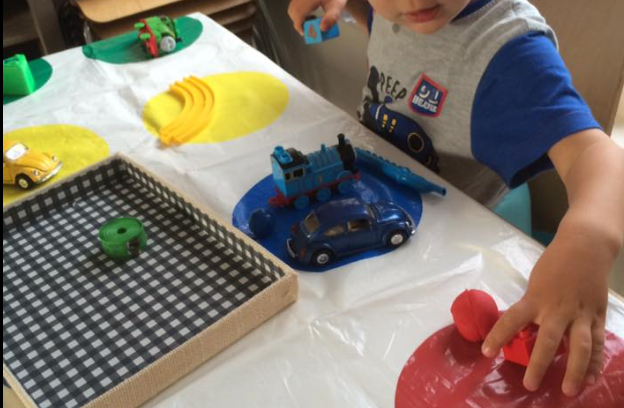 When eldest son was a toddler and middle son was a baby, I used to find days could be overwhelming. When I stimulated my toddler’s little brain early on in the morning, it some how ended up being less chaotic. He also wanted to be ‘moving around’ all the time so it was a good opportunity to try sit down activities. That’s when breakfast challenges were born. I knew my child had a shorter attention span than other children his age. Therefore, the aim was to try and create/find engaging activities that would require less time to prepare than they entertained him for. He was also non verbal at the time but had excellent receptive language so we also looked for opportunities for him to communicate his thoughts. The challenges we used were a combination of my own ideas, friends’ recommendations and some internet research.

Day 1: Car shaped ice cubes. At age 2, eldest boy loved anything with wheels so it seemed fitting to have a go at making these. He liked to push them across the table and loved it when they started moving faster (as the ice melted). He was not as keen on how cold they were.

Day 2: Magazine destruction. A really simple one – I gave him a selection of old magazine and he practised turning the pages, pointing out objects I asked him about. We also had a go at tearing. As my child refused to mark make, I needed to find other ways to improve his fine motor skills.

Day 3: Animal tracks. We used different coloured Play-doh (to make the ground) and a selection of plastic animals. Eldest son enjoyed making footprints with the animals. I made some trails for him and he had to guess which animal made them.

Day 4: Shaving foam. This was a sensory activities that only required a tray and some foam. We learnt that our child will probably have a beard when he’s older. He really didn’t like touching the stuff.

Day 5: Story stones. We had a selection of rocks that were painted for him by his Auntie. (If you have older siblings then they could paint the rocks in advance instead.) I asked eldest son questions e.g. Which one might you find in the sea? He would choose the stones accordingly. He then pointed out five favourites and ordered them, allowing Mummy to make each one feature in a home made story.

Day 6: Balls, sausages and arches. Out came the Play-doh again for this challenge. We worked on rolling out sausages and the more advanced skill of using two hands to roll out the balls. The activity became child led and he opted to aim the balls at the sausages, so I took this idea further and bent them into arches for him.

Day 7: Wheels or no wheels? We presented eldest son with a selection of his own toys and a hoop. I asked him to find the toys which had wheels and put them in the hoops. It was interesting to watch him checking for wheels by spinning them.

Day 8: Pasta and play dough. I gave my boy different types of pasta. He made the very quick discovery that dry pasta does not taste as nice as its cooked counterpart. I showed him how different parts of the pasta leave different imprints. He then had a go at making his own sculpture.

Day 9: Fuzzy felts. I loved watching him dress the people. He was good with positioning shoes, but put hats on first and was then unsure where to put the hair. Next, he placed trousers on upside down. The skirt was a tricky item. He had no idea what to do with it!

Day 10: Faces in the mirror. We used a portable bathroom mirror. I asked him to show me a happy face or an angry face. He found this very tricky. We then used the opportunity to practise action songs and pointing out facial body parts.

Day 11: Colour sort twister. Another selection of items and a twister board. He organised. I watched. Interestingly (over 3 years later), my boys had the twister set out in their playroom and recreated this activity independently – except they were just sorting trains. They have a lot of trains!

Day 12: Finger Puppets. We lay out a range of finger puppets. I put a silly voice on to talk to eldest son when he wiggled his finger. This activity very quickly descended into the puppets being on my fingers and tickling him behind the ears and chin.

Day 13: Cake cases. This was another one designed to practise developing his fine motor skills. Eldest son needed to separate the cake cases and place one over each ‘hump’. The tray was then turned over and this time he was trying to put the cases in each ‘hole’ the right way round. We also had a look at making repeating patterns with the blue and pink cases, although I’m sure most people would use it as a good excuse to start baking.

At this point we went on a family holiday to Spain but decided to continue with the challenge. We were now eating breakfast outside so that’s why the next activities are outdoor ones. It was particularly useful for the following flour challenge, as mess was avoided.

Day 14: Flour. Like with the shaving foam, eldest son was not keen to get his fingers dirty by making lines and patterns with his fingers in the flour. However, once we introduced the ‘trains in the snow game’ he loved it. He was happy to play with this for a while, content to manipulate the flour as long as he was using a spoon or other object.

Day 15: Sticking with glue. We used a few prepared pictures from the old magazines (used on day 2) and let him arrange them as he wished. The hardest point of this one was developing an understanding that the glue goes on the back of the picture. In the end, we encouraged him to put the glue on the background and then hunt for where he’d made it sticky in order to attach his picture.

Day 16: Bottle tops. Being in Spain, we were drinking a lot of liquids, including bottled water. This produced a lot of lids. You can do all manner of things with these, such as sorting or stacking or even decorating a caterpillar.

Day 17: Circles, triangles and oblongs. A little bit more preparation was required for this one. Luckily for me, my boys have a Grandma who is amused by cutting out circle, triangle and oblong shapes. We asked our boy to match up each shape in the correct place.

Day 18: Foam tray. We equipped eldest son with a golf tee and he used it to make dents in a food tray. It was an excellent excuse to eat the food on it. To make the activity more interesting, we drew a letter on the tray and he tried to make his marks somewhere on that letter.

Day 19: Coloured pegs. This was just a round piece of card with different coloured sections. While hanging out the towels on the washing line, we gave an assortment of clothes pegs to eldest son and asked him to peg them onto the matching colour. He found it quite challenging manipulating the right part of the peg but we were hopeful it would be useful in the future for his handwriting.

Day 20: Counting. The bottle tops came out again. Our son has had a love of numbers from well before he could say their names, so he grouped them together: one lid, two lids, three lids, four lids and five lids.